If you?ve been curious about how drones work or simply find them as amusing but don?t want to spend a fortune on one, you?ve come to the right place.

There are tons of quality drones on the market that are available at a very low cost, and we?ve taken the liberty of picking top 10 drones for your convenience. Without any further ado, let?s get straight to the reviews: 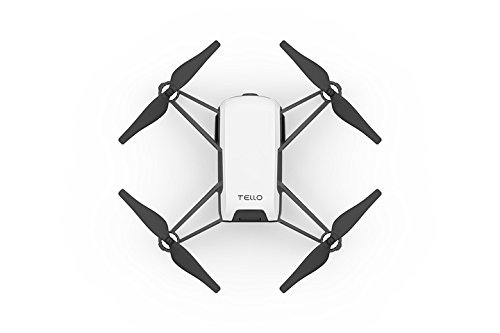 Let?s open up our review of the best budget drones with DJI?s Tello Iron Man drone. Just as you would expect from the world?s biggest drone manufacturer, Tello is just slightly more expensive than an average entry-level beginner drone. However, it sports the most advanced features and the finest camera that more than make up for the slightly pumped up price tag.

The Tello drone features a 720p 5MP camera and offers up to 13 minutes of total flight time, which is almost twice as much in comparison to an average drone.

Most people love it due to the Iron Man graphics, but its armor is actually as sturdy as the Iron Man himself. Some of the most interesting and unique features of Tello Iron Man are 8D Flips, Throw & Go, as well as mobile scratch programming. 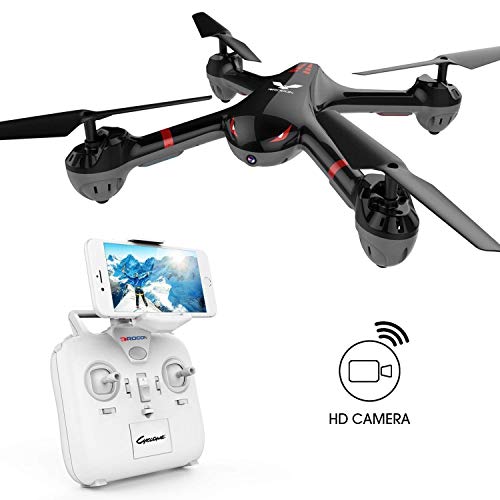 First and foremost, this drone operates at 2.4 GHz frequency, and its top flying time is within the range of 7 to 9 minutes; it packs a HD camera with 640*480p resolution, which is pretty great for a beginner drone. It?s incredibly small, and its dimensions measure 16.8 inches by 9.8 inches by 4.2 inches. Although it?s not foldable, its compact size makes it more transportable than most budget drone models.

Among the most notable flying and operational modes we include the ?headless? mode, the one-key return mode, and 360-degree flip mode. Apart from being able to control it via the remote controller device, you can also fly your X708W by using the Drocon application. Overall, it?s a pretty versatile drone that offers quite a bang for the buck. 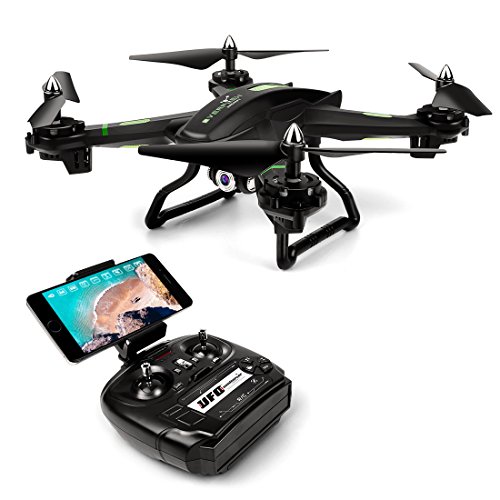 Next up is LBLA?s FPV drone. This model is one of the Amazon?s Choices in the ?camera drones for adults? section, and it is, in fact, one of the finest budget drone models available. It?s built like a tank, it rocks a 480p camera, and it sports multiple flying modes for you to enjoy.

This drone rocks a HD camera that can shoot both clips and photos; since this is a Wi-Fi drone model, you?ll be able to seamlessly stream the footage to your phone for as long as you?re in the Wi-Fi range.

Furthermore, LBLA?s drone is great for beginners because it sports a simplified ?headless? mode. Basically, instead of controlling all four propellers, you?ll simply need to input the direction you want to drone to fly in.

The total flight time of this drone is within the span of six to eight minutes; it?s powered by 3.7-volt 550 mAh batteries that need somewhere around two hours to recharge before you?ll be able to use it again. In comparison to our previous pick, LBLA?s FPV drone is more durable and takes slightly better footage with the camera it comes equipped with. 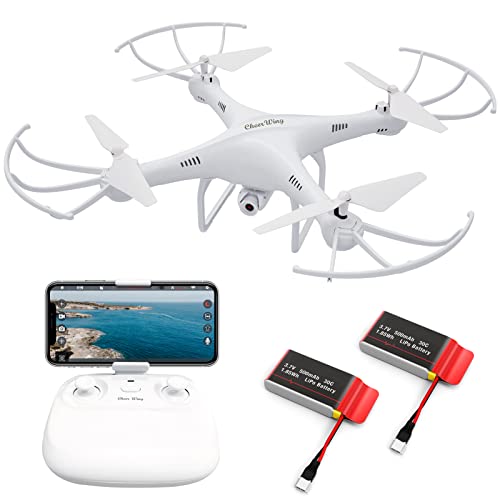 This drone is slightly bigger than average with dimensions that measure 14.17 inches by 14.01 inches by 4.25 inches; oddly enough, it?s surprisingly light as it weighs approximately 0.26 pounds only. It offers six to eight minutes of total flight time after which you?ll need to wait about an hour for the batteries to recharge. 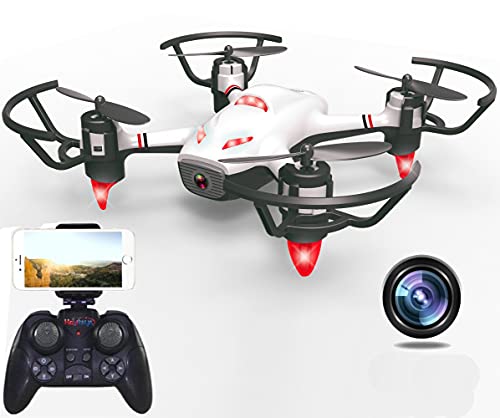 It also features the headless mode that will allow even kids to be skilful pilots; one of the most interesting features it comes supplied with is the remote controller that vastly resembles a PlayStation controller ? it sports both arrow keys and analog joystick pads, allowing you to control its every movement easily. 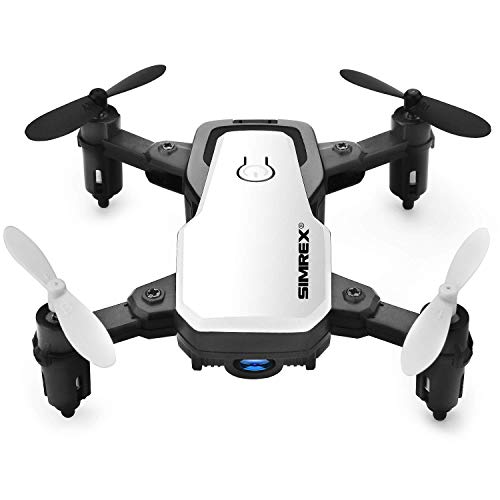 Simrex?s X300C is a miniature RC drone that boasts a foldable design, a multitude of flying modes, and a very sturdy shell made of hardened plastic.

It offers a flight time span of 8 to 10 minutes and can be operated from 30 to 40 meters. It also comes with a very convenient folding controller that sports two navigational sliders complemented with various trick settings and buttons, including the 3D flip, gravity switch, one key ascension, selectable speeds, headless mode, and gyro calibration. 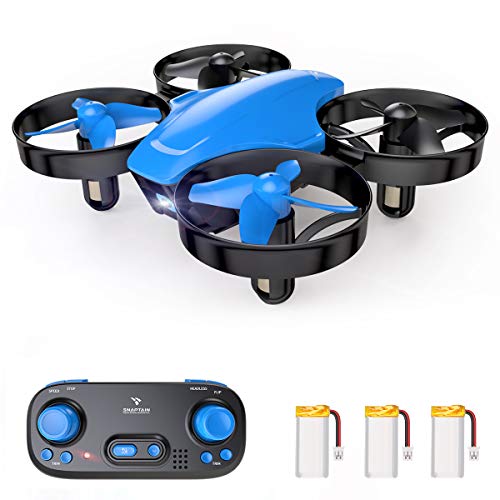 Snaptrain?s SP350 mini drone is absolutely perfect for kids and adults who want to get familiar with how drone technology works. Even though it might appear as flimsier than average, it boasts a remarkably simple Wi-Fi controller, adjustable flying speeds, and offers a variety of flying modes and tricks at a press of a button.

What makes the SP350 Mini Drone stand out from other budget drones is the fact that it actually offers up to 21 minutes of total flight time (as opposed to the average of 10).

Even though its propellers are made of relatively weak plastic material, they?re shielded by robust guard rings that will keep them intact. Although it doesn?t feature a built-in camera, it?s very fun and entertaining to use and provides the best ?training course? experience for newbies and beginners.

Much like our previous pick, Attop?s Drone is a budget drone meant for enthusiasts and people who are not all too experienced with the concept of drone technology. It sports a big and very plain controller that features a smartphone mount, a foldable design, and an integrated gravity sensor that makes it a bit more stable and reliable to use.

The reason why this particular drone model is absolutely perfect for children is because it sports a built-in AR app-based game that youngsters can compete in. Furthermore, it?s also compatible with Amazon?s Alexa and can recognize the most basic voice commands, such as directional commands, take off, and such.

Its foldable design makes it excellent for people who want to continue having fun with it on the go (or on travels), and it?s practically weightless, weighing roughly six ounces. 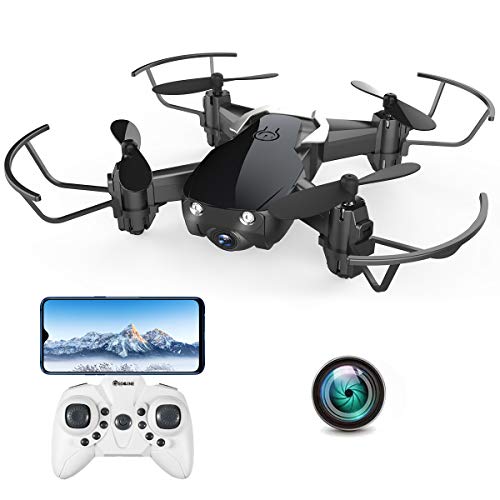 Next up we have Eachine?s E61HW Wi-Fi FPV Quadcopter drone. Apart from excelling in aesthetics, this is a full-fledged professional drone that somehow managed to find its way into the budget section of the market.

It rocks a 720p HD camera that is capable of taking top-quality photos and clips, as well as an integrated Wi-Fi model with exceptional range. Some of the most notable flying modes you will be able to use are the altitude hold, 3D flip, one-key return, trimming, gravity, and headless mode.

Furthermore, the E61HW is also compatible with VR devices; if you have an Oculus headset, you can pair this drone with it via the smartphone app quite easily. Last, but not least, this drone also comes with a beautiful ergonomic controller that allows you to access all of the aforementioned modes. 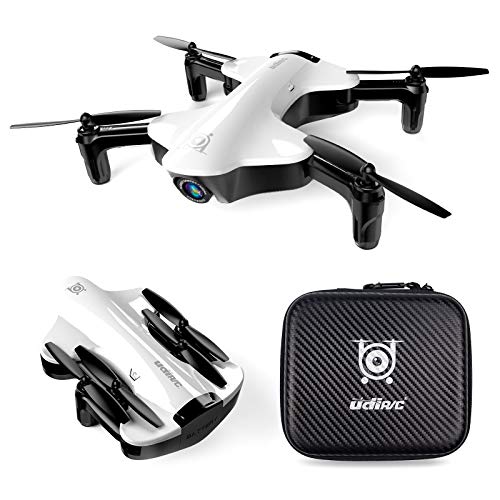 Let?s wrap it up with Cheerwing?s U29S-E mini drone. This is one of the cheapest foldable drones you can find on the market, and on top of all of its features you?ll also get a convenient carry case free of charge.

It rocks the altitude hold mode, trajectory flight, one-key take-off and landing, as well as the headless mode, so it?s beyond obvious that it works perfectly for beginners. It?s sturdy enough to withstand quite some punishment, and its propellers are capable of resisting moderately strong winds. Moreover, this drone rocks a 720p camera and is app-friendly.

The assumption that ?all budget drones? are almost exactly the same is a wrong one. Each model comes supplied with different features and is made of different materials, but that?s not the only things you should keep in mind where looking to buy one. Take these things into account before you make the final decision:

Drones under $50 are typically made of hard plastic. Now, even the most durable consumer-grade drone will get destroyed if it crash-lands at a high speed; what makes a budget drone durable is its ability to withstand a couple of accidental falls. Keep in mind that you should consider both the durability of the drone?s base and the sturdiness of the propellers (the latter is typically more prone to damages).

Some of the first drones were incredibly difficult to master because the operator needed to manually control the propellers; nowadays, drones are much more versatile and are capable of flying in any direction and feature simplified controls.

Even though boutique and high-end drones are superior in terms of well-roundedness, even budget drones typically feature a number of flying modes and settings, such as the ?headless mode?, one-touch takeoff/return, 360-degree flips, and such.

Altitude-hold and its importance for beginners

A good portion of people who are looking for a budget drone are beginners who do not want to invest a couple of hundreds of dollars in a ?flying toy? that could easily get ruined.

While beginners do tend to crash their drones every now and then, the advancements in drone flying technologies have yielded a new feature that prevents accidental falls, and it?s called the Altitude Hold.

If you want to ensure that your drone remains in the air, even if you?re unsure of your drone piloting skills, we recommend that you find a drone model that features the Altitude Hold mode. Basically, this mode activates a failsafe mechanism that ?strikes? a line below which the drone will not go, even if you try sending it in that direction.

The design of the controller is quite a big deal, especially if you?re a beginner. Certain controllers offer extended operational range, others are pretty ?short? in this aspect; some controllers feature dual operational modes (analog sticks and arrow keys) while some offer omni-directional joysticks.

The bottom line is that you should inspect both the drone and the controller before you decide which drone model is the best for you.

Beginner and budget drones offer up to 10 minutes of total flight time at best. Of course, there are exceptions, but drone models that can fly for longer periods of time usually cost way above $100. For comparison?s sake, some of the finest drones in the world, such as DJI?s Phantom 3 or 3DR Solo can fly for 22-25 minutes per charge.

The amount of time the batteries need to recharge is not in any way influenced by the total flight time; rather it?s up to the quality of the batteries themselves. Since budget drones typically feature budget batteries, the average recharge time is between 1-2 hours.

The last thing you need to take into account is the control range ? the range from which you can operate and fly your drone. Again, the standard operational range is approximately 100 meters, but that?s mainly because mid-priced and high-end drones feature a control range of beyond 1,000 meters. Budget drones typically have a control range of 50-100 meters.

What drone is the finest model in the budget section?

Since DJI makes the best drones on the entire market, it?s obvious that their cheapest model is also the best entry-level drone available, and that is the Tello.

Are budget drones flimsy and prone to malfunctions?

Generally speaking, budget drones are not as sturdy as boutique-level ones, but the reason why they?re cheaper is that they are typically not as versatile or that they don?t offer as much total flight time.

What is the average flight time of a budget drone?

The average flight time of a budget drone is roughly between 6 and 10 minutes. Weaker models typically offer 8-10 minutes of flight time, but there are also certain budget drones that can fly up to 20 minutes per charge.